The credit for this amazing find goes to Toby Johnson. I truly appreciate how he was willing to share this evidence with other researchers, and not keep it all to himself! I have always found the Oregon researchers t be very open and honest in my dealings with them. Thom Powell was kind enough to share the photos (bottom of page) with me and the following report comes from Guy Edwards' web site.

South of Eugene, over 120 footprint tracks were found in a clay-mixed substrate that was a perfect material to capture and record footprints. We believe the tracks were made as recently as Saturday February 11th, although the first few prints were not discovered until Sunday the 12th.

Quick run down of events.

(SUN Feb 12th) Max is a retired man who once worked in the auto industry and now spends his retirement restoring cars, he happened to be looking for cars in the London, Oregon when he is approached by a man walking his dog.
(SUN Feb 12th) The man walking his dog mentions to Max there are three Bigfoot prints near the tree line. Max checks it out and is surprised to see the three good tracks
(MON Feb 13th) Max can't sleep, has to go back to site to take pictures.
(TUE Feb 14th) Max remembers Toby Johnson's Sasquatch-mobile, it had been decorated with large Bigfoot stickers resembling footprints. He had also recalled reading an newspaper article of the first Oregon Sasquatch Symposium Toby had held in 2010 at Lane Community College in Eugene. The Sasquatch-mobile is now owned by Toby's ex-wife, sans stickers, but Max, the car aficionado that he is, recognizes the vehicle non-the-less. So when Max went to share the Bigfoot prints he contacted Toby's ex-wife first. Max gives his contact info to Toby's Ex
(TUE Feb 14th) Toby calls Max and Max sends the pics of the three prints via phone.
(WED Feb 14th 8:00pm ~ THURS Feb 15th 7:00am) Toby goes to the site with his friend, an avid hunter and a local. Since Toby's friend wishes to remain anonymous, we will call him Tracker. Both Toby and Tracker see the original three and few others that were not photographed, these other tracks were in heavy vegetation.
(THURS Feb 15th afternoon) Toby goes home and Tracker goes home. Toby tries to return to site later in afternoon, due to obligations he can not stay long, as he leaves Tracker returns. Tracker is with his daughter's boyfriend, and continues to follow the tracks on his own time. Tracker follows the tracks out of the vegetation into a clay-like substrate and realizes there are at least a hundred prints. He calls Toby.
(THURS Feb 15th 3pm-ish) Toby calls Cliff Barackman, co-host of Finding Bigfoot and a self-described "track/cast-nerd". Cliff drives 2 hours to investigate the scene.
(FRI Feb 16th 6pm) I am able to get a ride with Thom Powell, we meet Beth Heikkenin and Toby Johnson and see the tracks ourselves.
(SAT Feb 17th 6am) Our original count was around 118 sequential prints. Cliff Barackman was able to count 122, we will confirm if his count are the sequential set or total prints in the area. We made two set of measurements recording step length stride length.

Stride length is the distance between successive points of initial contact of the same foot. Right and left stride lengths are normally equal.

Below is a rough illustrated diagram of the general path and the measurements we took. Knowing how difficult it is to get exact measurements, I added a third column titled Calculated Stride Length to compare against the Measured Stride Lengths. The numbers in the calculated column are based on the recorded step length. The numbers I am interested in are the average and means.

The mean is the usual average,

The median is the middle value, so I'll have to rewrite the list in order

so in Series A: Step Length median is 46:

As you can see in the two sets, Series A and Series B, there average numbers and the means for the step and stride are relatively close. 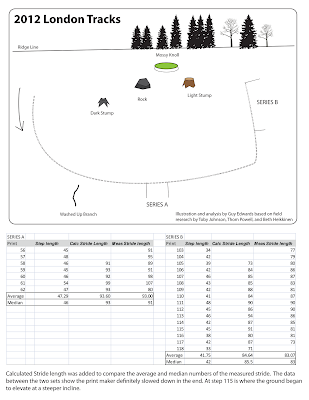 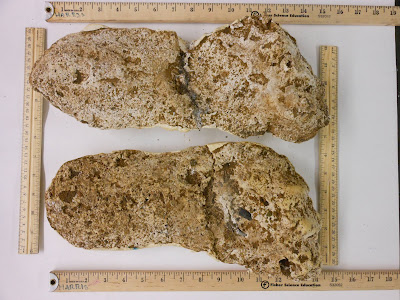 All the other tracks are still mud covered until they cure (2 weeks). These two were broken during transport so I cleaned them before I could repair them. 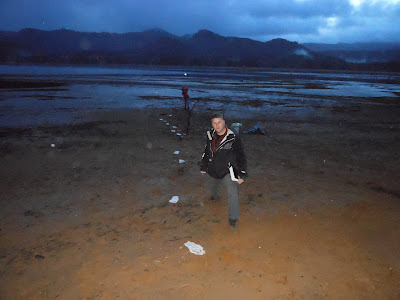 Posted by Bigfoot Hunter at 7:50 PM

To promote and share research, information and events regarding the existence of the unlisted humanoid species known as Sasquatch or Bigfoot; and to help further education and understanding to the public regarding the species, throughout the United States of America.

See Something? Say Something!

If you believe you have had an encounter with a Bigfoot, tell me all about it!

Whether it be a sighting or a vocalization or maybe footprints,
Send Me an Email.

Friends of The Bigfoot Field Reporter